Czeck Republic, Finland, Poland, Croatia, Germany, Greece, schools from these six countries are working together on the Erasmus+ project „You on my mind“ for the next two years. At home, they will be preparing films and ppp about their schools, their towns and people who showed moral courage in dire and dangerous situations. They will also work out a logo which will be the entry in a logo competition. All these products won’t be for nothing, of course, they will be presented at the six meetings, which will be held in the respective countries.

The Czeck Republic is the first to host, so everybody else travelled to the Moravian town of Hodonin on Sunday, 29th of October 2016.

At Hodonin station we were all warmly welcomed by our collegues Veronika and Monika and the hostfamilies, who then set off with our very excited students.

Monday morning started  officially: The school’s principal and town officials welcomed us, the school’s choir sang and we were all deeply impressed by the performance!

Then, it was time to introduce us and show who we are and where from. Everybody enjoyed learning about the other countries, towns and schools.

Everybody got together again and after some practise, 56 students from 6 different countries brought a brilliant perfomance of „The Lion Sleeps Tonight“ on stage!

With this, our first day of „You on my Mind“ in Hodonin ended and we all went home, our minds busy with new experiences and impressions. 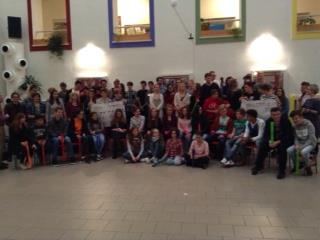 Tuesday’s focus was on arts and design. Accordingly, the day started with a logo competion. Each school had brought with them a logo, based on our project’s motto and each was colourful, creative, thoughtful and very different from the other’s. After lively discussions within the national groups and three rounds of voting, the winner was … Finland!

We watched a beautiful film by Czeck students, which visualized being a Jewish teenager in the times of the Shoa. We learned about Marie Kahle, Lela Karagianni, Wladyslaw Bartoszewski, Martti Ahtisaari and Zlatan Stipisic Gibonni.

Another highlight of the day was the „one-country“ project. Split into small international groups students created flags for a world which consisted of only one country. And again, the results were brilliant, creative, coulourful, meaningful and varied! After presenting the flags, everybody painted their own world’s T-shirt to take home and so the second day in Hodonin ended with more ideas, impressions and experiences. 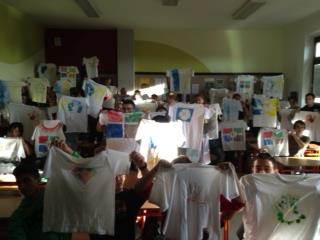 Wednesday morning saw all of us at the banks of the river Morava for our tolerance through sport’s day. Again, students were organised in international groups to work on their tasks, which took them all over Hodonin. This morning ended at Hodonin’s townhall, where the teachers were welcomed by Hodonin’s mayor and shown around the beautiful 1902 building. Everybody walked up the look-out tower to enjoy the view of the town, fields and forests, across the Slowak border.

After a break it was rehearsal time for our Erasmus-evening. Parents had prepared a wonderful buffet. And our hosts and the five international groups provided the evening’s programme of songs, dances and

Our Czeck host started the evening off with an unplugged interpretation of „Stay“ and a tap dance performance. What happens when old meets young was presented in a sketch by the Croatian group and the Germans got everybody dancing.

After an intervall, the second set opened with traditional Czeck folkmusic, performed by our hosts.

The Greek group presented a furious version of the Sirtarki, the Finish group showed us, what modern Finish folksongs are like and we all sang along a Polish folksong that the Polish students taught us.

William Shakespeare’s „Shall I compare thee to a summers’s day“, performed by Czeck students ended the evening’s programme. 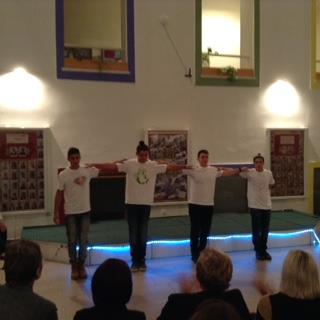 On Thursday we left Hodonin for Mikulov. First we visited the castle and looked at a giant barrel, since Moravia is a wine growing region.

Then we walked down to the former Jewish quarter because Mikulov was a centre of Jewish life and study until 1939.

We visited the last remaining „Upper or Old Synagogue“, which has just been renovated and is a cultural centre today. The Jewish cemetery is one of the countrie’s largest and has been established in the 16th century. Famous Chassidic  Rabbis are buried here and their graves are still visited today. As the temperature dropped and the wind was pretty cold we were all glad to enjoy a hot lunch at a local restaurant. In the afternoon we enjoyed a Jewish dance workshop and danced together in Mikulov’s former synagogue.

Friday morning was sunny … and frosty, when we set off to visit the chateau of Lednice. Dating back from the Middle Ages, it was rebuilt several times in the course of the centuries by its owners, the Lichtensteins.

Today’s chateau dates back from the 19th century and many of its 400 rooms are open to the public. Richly carved staircases and panels dominate most of the rooms, luxurious furniture and impressive paintings speak of the representational function, this chateau once had.

After a guided tour, we were free to roam the extensive park and Baroque gardens which surround the chateau.

All this exercise and fresh air made us hungry, of course and we finished our programme in a nearby restaurant, before returning to Hodonin. 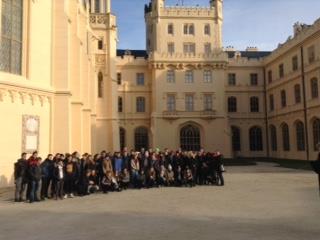 Saturday marked the end of our week together. There were a lot of sad faces and tears at Hodonin station, as each group bid their farewells and travelled back to Finland, Poland, Croatia, Germany and Greece.

You on my mind – Erasmus+ meeting in Hodonin, Czeck Republic