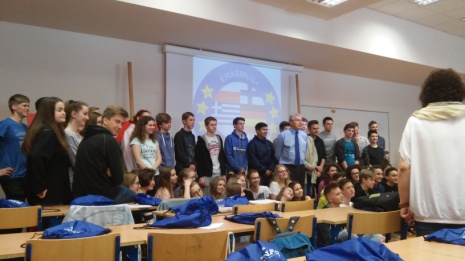 During the whole day there was the arrival of participants, then the first meeting with their hosts and the teachers were taken to the hotel. After some time to rest, the students were among themselves and those teachers who had already arrived took a walk around the city and finally all of the teachers had dinner with typical Polish food including Piroggi and Zurek. Fortunately Joanna’s husband and Beata volunteered as drivers and a tour guides likewise. 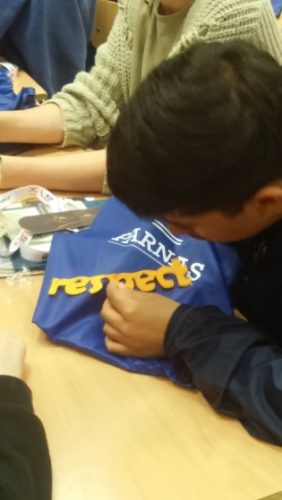 At 9am both students and teachers had the first meeting at school in the aula. After some general information, the presentations of school/country/city started. Then, about 9.45am a lecture was delivered by EU specialist for education Bill Martin from the UK, and after that we had the opportunity for question and answer time. Prior to lunch break the second part of the presentations was held. In between the students were able to reflect on their first impressions with classmates, but there were also frequent contacts between students from different nationalities. The afternoon began with art projects about respect and tolerance: Students sewed tags with words like „freedom“ or „respect“ on their sports bag and even were asked for a creative approach to the word „Tolerance“ by designing a table with colours. Because this had to be faced within multinational groups, they not only had to speak English, but also find common ground how to finish the task.

Day 1 ended at 3.30pm: The students went bowling and spent time with their hosts, spent some teachers enjoyed universal pastimes like shopping and sightseeing in the city centre, some gathered empirical data for social studies in a local brewery.

In the evening there was teacher’s dinner at OK Wine Bar in the centre with a terrific view of the riverside and an even better combination of food and wine. 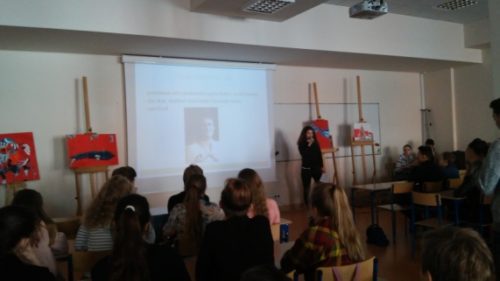 At 8am there was the meeting at school, starting with presentations about courageous people. After that, we all left by public transport for the city centre in groups, there had a walk around the centre and finally got to the Aula Leopoldina in the university building, which is exactly on the meridian line. Apart from the remarkable assembly hall the local tv was waiting for us to interview Beata, Joanna and some students about the project.

Then we didn’t have to walk far to get to the town hall and there enjoyed another speech as well as question and answer time with the mayor and his staff. Then we went for a walk to a park with celebrations around the European Union. Although this was quite a windy and cold day, there were stalls from all the member countries. In the one hour the students were allowed to move freely in the park, the most favoured place was the stall that offered free candy floss. But there was also some cultural program with music and information about the member countries.

In front of Hotel Monopol, where Hitler once gave a speech, students and teachers parted for lunch.

Then, at 3pm we all went for the synagogue and enjoyed some 2 hours of information, including a walk around the synagogue including its facilities, such as the gallery and the mykwa. Everything was explainend by our excellent Polish guide Kasia Andersz. This being the last episode of a tiring day the teachers headed for a bar next to the synagogue to finally enjoy some beverages and left the students to themselves to enjoy time with their hosts. In the evening the teachers had dinner in an Italian restaurant and then went back to the hotel to get some rest and prepare for the next day. 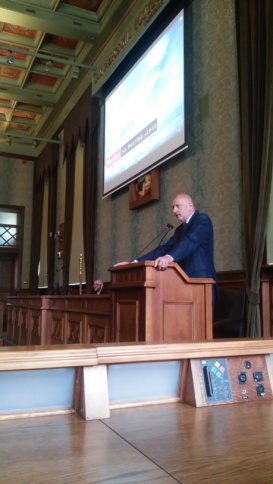 After a short breakfast with hords of elderly Germans and a life-threatening shortage of coffee with milk the teachers were picked up at quarter past 7, then were driven to school where the students already awaited them. The Polish organizers even hired the world famous actor Daniel Craig as a bus driver! So, by bus the whole group made its way to the remains of concentration camp Gross Rosen, which now is an information centre.

Not even a breakdown of one of the buses could hinder us from going there and having a guided tour around in the area. Although the majority of buildings isn’t there anymore, there were plenty of interesting and, above all, depressing stories to tell, for example the one of the comander of the camp who liked sitting close to the crematorium or the image of three people sleeping in one bed at the same time and being told when to turn at night.

Luckily, our next stop was the reconciliation centre for Polish and German students and with it, an optimistic view especially on German-Polish post-war relations. Before lunch break we had a walk to the „House on the hill“ in which 25 people planned the state of Germany without Hitler in the 40s. Among those names like Von Moltke and Stauffenberg can be found. There is also a memorial for those members of resistance who were executed shortly before the end of the war. While the students had two hours of workshops, the teachers were free to join those workshops or gather information about the centre itself as well as see the exhibitions. From there, it took again about 60 minutes to get back to Wroclaw and enjoy the rest of the evening, either with your host family or, as a teacher, at a place called „Korba“ with good food, a wide range if different beers and reasonable prices. 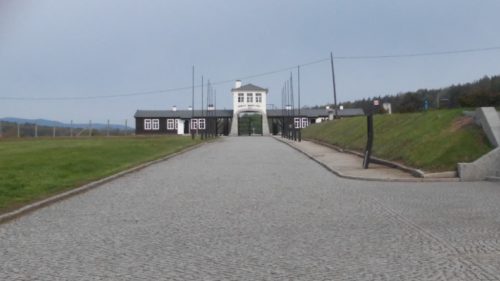 Meeting was at half past seven at school, so everyone was in a hurry having breakfast and preparing for the day. Fortunately, the weather turned out to be excellent. After two hours of driving we reached the national park area of Karkonosze and we started for some hiking. Joanna, who also had her birthday at that day, set an ambitious pace and we all finally found the right speed to be at the guesthouse around noon and enjoy the terrific view of the surrounding mountain ranges. Although there was still dome snow, it got hot very soon and apart from two people, all got to our place of rest in good spirits. Then, following a lunch break, the whole group made its way to the wooden church of Wang in Karpacz, which is one of few of its kind and was originally built in Norway and purchased by the Prussians. After that, once more the „5 Polish minutes“ turned out to be a bit more than that and we all were able to rest at the restaurant U Ducha Gor, which means „Spirit of the mountain“. At the end of that day with an estimated number of about 7 million selfies and an unfatiguing photographer Raunno we had all caught a good deal of spirit of the mountains, especially when it comes to the famous Karkonosze mountain tan, which is also known as sunburn. It then took about 2 hours to end this strenuous, but very rewarding day to get back to Wroclaw. For some, the evening ended in bed rather early, some already planned the next day in the vicinity of the hotel bar. 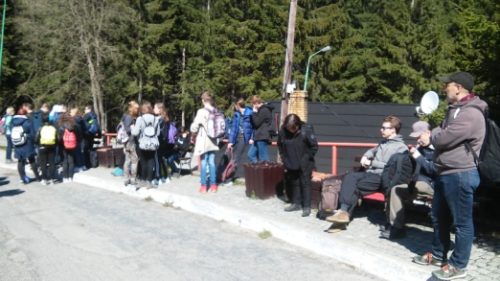 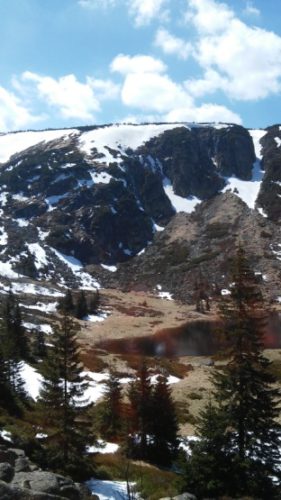 The last day of our project started as relaxed as the previous evening ended: After plenty of time for breakfast everyone met at the assembly hall of Parnas school and teachers and students were seen off officially. There were the final photos taken and farewell gifts were handed out. Furthermore, Rauno of Finland presented the photobook with memories from the previous trip to Finland. After an evaluation the teachers were free to prepare for the last trip to the museum of Solidarnosc while the students had a game and were able to rehearse their contributions for the final evening. At 5pm the last official meeting took place and the students once more presented their contributions for the evening, to which also guest parents were invited. Apart from that and behind the scenes, a vast buffet had been prepared and offered specialties from the various countries, each made by the Polish hosts and their parents. 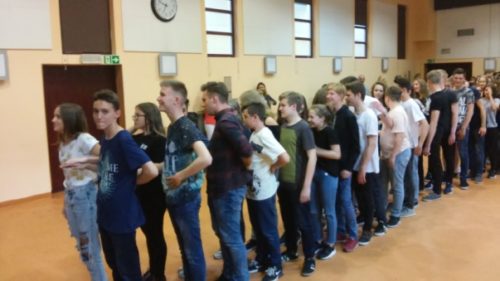